The Abu Dhabi Chamber of Commerce and Industry, in cooperation with the Pakistan Business Professional Council in Abu Dhabi and the UAE Ministry of Economy, have organized a webinar on the “Latest Updates on UAE Economy 2021 and New FDI Law:%100 Foreign Ownership”.

The webinar presented a general overview of the UAE Economy in 2021, and the new FDI regulations allowing for 100% ownership to foreign companies and investors.
More than 350 officials, companies and interested individuals operating in diverse economic sectors attended the virtual seminar.

In his opening speech, His Excellency Mohamed Helal Al Mheiri, Director General of the Abu Dhabi Chamber, said that the decree that was issued by His Highness Sheikh Khalifa bin Zayed Al Nahyan, President of the UAE, in November 2020 amended the restrictions on foreign ownership within the Companies Law in the United Arab Emirates. “The newly issued decree amended the pertinent provisions of the UAE Federal Law No. 2 of 2015 on Commercial Companies, and supersedes the UAE Federal Law No. 19 of 2018 on Foreign Direct Investment (or the “FDI Law”),” he said.

H.E. Al Mheiri pointed to some of the important regulatory changes, which include: a cancellation of the requirement for commercial companies to have a majority Emirati shareholder or agent; and allowing full foreign ownership of onshore companies in certain commercial activities in accordance with the policies set by the UAE Cabinet. another change stated that where an existing company is converted into a public joint stock company, it can sell up to 70% of its shares in the related public offering (up from the previous 30%).

The Director general emphasized that these changes are quite significant, and reflect ongoing efforts of the government to develop a favorable legislative environment for the different economic sectors to thrive in the UAE. Some of the expected benefits are:
• Stronger attraction of FDI (as per the latest UNCTAD data, inward FDI in the UAE exceeded USD 13.7 billion in 2019, which was more than all other GCC countries combined)
• Increased private sector competition, resulting in better products and services to end consumers
• Adoption of international best practices in sustainability and 4IR technologies (e.g. vertical farming, renewable energy, waste-to-energy, 3D Printing, Augmented reality, Internet of Things, etc.) by attracting companies and contributing to knowledge transfer
• Further creation of job opportunities in the private sector

“Our wise UAE leaders have been clear in their economic vision: a versatile, dynamic, and robust, economy that will be able to flourish regardless of the economic environment. The UAE has continuously shown its resilience in response to the through various economic crises over the last 20 years, and most recently the COVID-19 Pandemic. Our leadership has vowed to be the fastest country to recover from the pandemic,” Al Mheiri added.

“We are already on track to achieve this, with more than 50% of the population by the first quarter of 2021. The UAE is leading the Arab region in the COVID-19 Economic Recovery Index issued by the Horizon Research Group, and occupies advanced positions and rankings in all other international competitive indexes.

The UAE government’s several economic support plans and increased public spending, as well as the wide availability of COVID vaccines, leads us to hope for a strong economic rebound in 2021 and beyond,” he remarked.

Al Mheiri added that since the Abu Dhabi Chamber is the voice of the private sector, it is continuously taking steps to support businesses to achieve sustainable economic growth through education, support programs and working closely with both the private sector and government to support innovative ideas and solutions.

For his part, His Excellency, Juma Mohammed Al Kait, Assistant Undersecretary for International Trade Affairs at Ministry of Economy, emphasized that the country’s leading position in the global economy did not happen overnight, noting that it is the product of the far-sighted vision of our forefathers.

“The country has reached phenomenal economic milestones since its inception 50 years ago, thanks to the forward-looking approach of a leadership that has remained constant in fulfilling a united vision for the nation,” he reiterated.

H.E. Al Kait added that this webinar, which is organized by the Abu Dhabi Chamber, highlights the UAE’s economic programmes and its plans for the post-COVID-19 era.
”The efforts to reduce dependence on oil and gas income have been strategically pursued with the intent to broadly diversify the national economy to be an innovative and competitive ecosystem that focusses on international trade, banking and finance, tourism, real estate, manufacturing, and technology,” he said.

He stressed that the UAE government “is continuously involving the local and international private sectors to participate in economic activities by forming new laws and regulations focused on achieving sustainable development, putting in place a fit infrastructure to make the country a conducive environment to do business and by constantly enhancing the business environment in line with global trends.”

The Assistant Undersecretary pointed out that it is a natural course of the economy to grow as more people come together and do business; and it is one of the aspects that made the UAE an attractive destination to investors. “Today, a total of 300,000 companies are operating in the UAE in the form of public and private joint stock companies and companies with limited liability, and sole proprietorship, to name a few,” he remarked.

“The full-speed efforts and cooperation of both the public and private sectors in investment promotion programmes over the years have helped increase the levels of FDIs in the country, which further strengthened the economy’s resilience when headwinds such as the pandemic hit the country.

From 2017 to 2019, the value of FDIs in the country had reached USD 35 billion. In fact, the UAE was the second largest recipient of FDI flows in West Asia after Israel.”

Concerning law amendments, Al Kait stated that the most recent amendments to the UAE’s Commercial Companies’ Law represent a major turning point. The amendment to the Commercial Companies Law revokes the country’s FDI law to allow instead 100% ownership of onshore commercial companies by foreign nationals within the country (except in strategic sectors); and establishes a new committee to propose activities of strategic impact.

In addition, These amendments will bring about enormous economic benefits, which can be summed up in: stimulating local production, boosting competitiveness, promoting innovation and efficiency, as well as advancing the business and investment climates.

“The amendments to the Commercial Companies Law are a statement that the UAE has a fertile legislative environment for establishing businesses and projects and are poised to promote an open business climate and attract a host of valuable investments; a significant transformation to the country’s economic model,” Al Kait added.

“With all these efforts in the backdrop, the UAE economy is fully geared to achieve its 2071 vision with a proactive spirit and engagement. We continue to adopt agility as an important guide to address challenges and maintain the gains we have achieved in the past 50 years. We are marching ahead to turn the pages of our history with an outlook of a future economy that is sustainable, resilient, and competitive and that is based on knowledge and innovation,” he concluded.

For his part, Dr. Syed Qaiser Anis, President of Pakistan Business Professional Council in Abu Dhabi, praised the role Abu Dhabi Chamber plays in supporting local businesses and activating the role of the private sector, extending his praise to the Ministry of Economy for its efforts in this regard.

“In response to the global impact of COVID-19 and its pressures on the international business landscape, including here in the United Arab Emirates, a multi-nation group of business councils and chambers based in Abu Dhabi and Dubai have joined forces to engage with the UAE government and work collectively to ensure business continuity in the UAE,” Dr. Anis said.

He added, “The Business Continuity Task Force is a single window of communications between the multi-nation business community and the UAE government. We bring together members of the UAE business community through their respective business councils and enable them to collaborate on a joint task force aimed at streamlining communication and deliverables to the relevant authorities. We currently represent 31 Business Councils and 6,500 companies in the UAE.”

“According to the World Tourism Organization, the UAE is currently one of the ten fastest-growing tourist destinations in the world. As a result, these have been able to attract investment into the country, thus the Foreign Direct Investment (FDI) increased.”

Dr. Anis emphasized that the UAE is now on the track to bounce back economically, noting that the UAE economy is expected to begin recovery to pre-COVID-19 levels this year, 2021, especially that the FDI Law on 100% Foreign Ownership has been amended to further attract investments. “Foreign Nationals now can own 100% of companies within the onshore jurisdiction of the UAE, which previously required 51% Emirati ownership to do business outside of UAE free zones,” he added.

“This remarkable development is expected to further enhance the UAE’s position as the Gulf’s premier business hub and a stronger magnet for foreign capital and investment. The move is expected to support the continued growth of the UAE as it becomes a more robust, vibrant, and diverse economy and place to do business.”

“And, in the next 50 years - 2071, the UAE will become the first in the world in global indicators for well-being, happiness and quality of life,” Dr. Anis said. 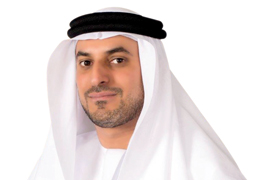 Despite the challenges posed by COVID-19 on economic sectors across the globe, the Abu Dhabi Chamber of Commerce and Industry has concluded 2020 by focusing its efforts on supporting businesses and encouraging investments in Abu Dhabi for the private sector to become a strategic partner in a number of achievements on the economic scene.

Abu Dhabi School of management (ADSM), a subsidiary of the Abu Dhabi Chamber of Commerce and Industry, has announced that it has been awarded the Business Graduate Association (BGA) Validation for the full three-year period. 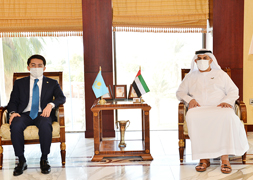 His Excellency Mohamed Helal Al Mheiri, Director General of the Abu Dhabi Chamber of Commerce and Industry, have received His Excellency Zhaslan Madiev, Deputy Chairman of the Agency for Strategic Planning and Reforms of the Republic of Kazakhstan, and the accompanying delegation at the Chamber’s tower in Abu Dhabi. 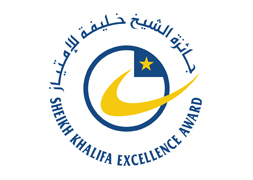 During the 2nd Meeting of the High Committee

HE Saeed Abdul Jalil Al Fahim, Chairman of the SKEA High Committee announced the launch of the SKEA 2021-Model for this year's 19th edition based on the latest technical and administrative experiences adopted locally and internationally.