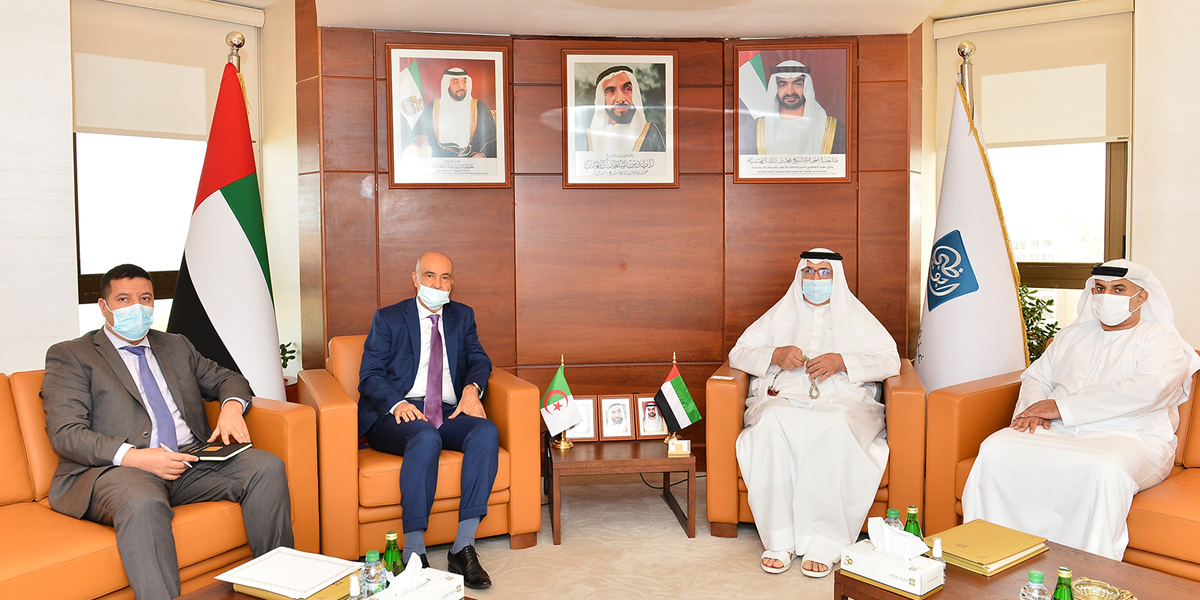 During the meeting, which was attended by His Excellency Mohamed Helal Al Mheiri, Director General of the Abu Dhabi Chamber, H.E. Almazrui pointed to the strong relations between the two countries, emphasizing on the need to work together to bring the economic levels between the two sides to new levels.

“Abu Dhabi is amongst the top world countries in attracting money and investments since it acts as a strategic doorway towards the European and African markets,” he said.

H.E. Almazrui expressed his thanks and appreciation to the Algerian Ambassador, who had completed his diplomatic mission to the UAE, praising his efforts during his mission in the UAE by representing his country. “H.E. Tawahria’s mission in the UAE contributed to solidifying the economic relations between the two countries,” the Chairman said, wishing the Ambassador all the success in his future endeavor.

For his part, Ambassador Tawahria commended the welcome he received during his time in the UAE, calling on businesses in both countries to explore potential partnerships in diverse sectors. He expressed his countries interest in focusing on many sectors including desert agriculture and healthcare, stressing on the need to benefit from the UAE’s long experience in this regard.

H.E. Tawahria presented the new investment law in Algeria which focuses on economic diversification including strategic sectors such as energy industries and pharmaceuticals. He pointed out that the new roadmap aims at refreshing the Algerian national economy and gaining the credibility of foreign investors, calling on the Abu Dhabi Chamber to form a trade delegation to visit Algeria after the conclusion of Dubai Expo in order to introduce Emirati invertors on the available investment opportunities in his country.

Ambassador Tawahria praised the strong cooperation with the Abu Dhabi Chamber during his time, saying that his mission has contributed to the joint cooperation between the two countries. He wished the UAE and its people more progress and prosperity. 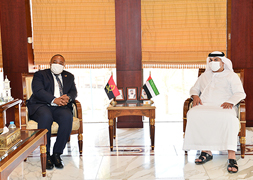 His Excellency Mohamed Helal Al Mheiri, Director General of Abu Dhabi Chamber of Commerce and Industry, has received His Excellency Victor Francisco Fernandes, Minister of Industry and Commerce of Angola, at the Chamber’s tower in Abu Dhabi to discuss a number of topics of shared interest. 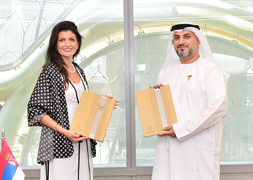 Within its participation in Expo 2020

Pursuant to their awareness in the importance of solidifying their relations and developing economic and trade cooperation between their respective members, the Abu Dhabi Chamber of Commerce and Industry and the UAE-Serbia Business Club have signed a cooperation agreement at the Chamber’s office in Expo 2020 in Dubai. 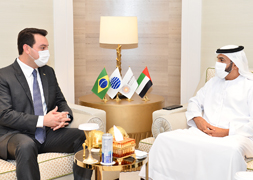 His Excellency Dr. Ali bin Harmal Aldhaheri, 1st Vice Chairman of Abu Dhabi Chamber of Commerce and Industry held a meeting with Carlos Massa Júnior, Governor of the State of Paraná, Brazil and the accompanying delegation at Dubai Expo 2020 to discuss the prospects of trade and investment cooperation between businesses in Abu Dhabi and the State of Paraná. 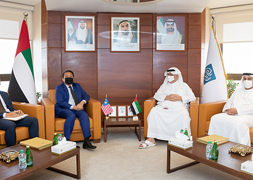 His Excellency Abdulla Mohamed Almazrui, Chairman of Abu Dhabi Chamber of Commerce and Industry received His Excellency Mohd Tarid, Ambassador of Malaysia to UAE, at the Chamber’s tower in Abu Dhabi to discuss the prospects of expanding economic cooperation between the business communities in both countries.